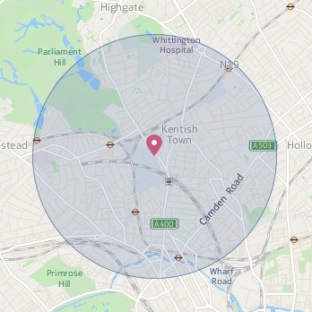 It’s about time Facebook really stepped up its use of mobile data. Over the last couple of years they’ve developed their offering so they know exactly where businesses are location and, via their mobile apps, they know exactly where people are located. Combine the two and you get “Local Awareness” – something that has the potential to be a very dangerous weapon for Facebook.

Before now your best guess with Facebook advertising was to drill down by town or city, depending on where you are located. It was, and still is, a very useful too – it’s limited to where someone lists their town is, which is great about 80% of the time but doesn’t factor in people moving about, university students sort of living in two places at once, and the small problem of seven millions users living in London who have their location listed as “London”.

It was like trying to draw with a blunt pencil, or throw a javellin into a dartboard. The results were good, very much so, but it relied on certain factors being in your favour. What Facebook have developed in the mean time, first of all, is an app that has a very good idea of exactly where someone is at this exact moment. Also, they’ve really worked on their local data with businesses, so much like Google Local now your business on Facebook has an address listed with opening times, a location, a map – all things like that. Facebook local businesses have almost drafted into a combination of Google Local and Yelp (they’ve got reviews too).

What does Facebook Local Awareness mean on an advertising level? The potential is a very exciting opportunity for small businesses with a physical location. The call to action with a local awarness ad is “Get Directions”. Facebook works out where you are, works out where the store is and allows you to get directions to the store. Imagine someone sitting in a coffee shop half a mile from your store. You can put an advert in front of them inviting them to your store.

Things are rarely that simple, of course, but the potential is definitely there. Facebook, like all advertisers, always wants to work hard on delivering relevant ads, and by using their live locational data, they’ve taken a massive step towards that. It also offers a great opportunity for very small or hyper local businesses, where general advertising online was simply too broad, to be able to get in front of customers relevant and (most importantly) local to their business.

View Email Marketing
We use cookies to ensure that we give you the best experience on our website. If you continue to use this site we will assume that you are happy with it.OkPrivacy policy