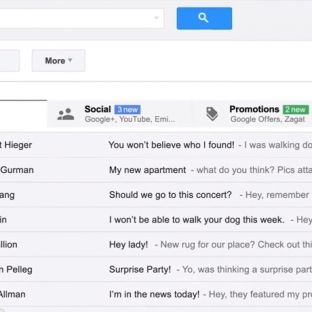 This summer Gmail, Google’s email platform, announced a new tabbed system for its users, automatically sorting inbound email into certain categories. These categories were primary – generally for person-to-person mail, social – for social networking emails and promotions – from promotional and email marketing mail. The crux of this change for email marketers was this: any messages that arrived users that didn’t filter into the primary inbox they wouldn’t receive a notification about.

The fear, in short, was that if users were no longer receiving these messages then would the open rates go down? The early data in this regard isn’t positive with stats varying but seemingly all Gmail tabs related tests showing open rates post-tabs dropping. Although it should be stressed, these are only early tests.

If the trends continue, marketers will ask one question. How can I get out of the promotional tab? The answer, it seems, is with great difficulty. Because promotional emails that are executed correctly are very easy to spot (you don’t see many personal emails with unsubscribe buttons), Gmail doesn’t have a difficult time working out what’s what.  Users do have the option of manually putting your emails into their primary inbox, but I would honestly suspect the only people that would be bothered enough to do that would be the people that would seek out your mail from within the promotions tab anyway.

But it’s not all the end of the world. Firstly, Gmail is only one provider. One of the biggest, yes, and if these changes prove popular it’s hard to imagine that other providers like Yahoo and Outlook will wait long to follow suit. Secondly, these changes were opt-in. Thirdly, the evidence suggests that this hasn’t been as widely picked upon as people might think. Data suggests that less than half of all Gmail opens are even happening in a client that would support tabs in the first place – native apps on iPhone and Android, along with non-Gmail email clients generally don’t support them.

Personally, I fit into exactly the category this concerns. A Gmail user, that uses the Gmail website on desktop, and the Gmail app on mobile devices – I’ve had tabs filtering my emails for the past six months. For me, these have been a huge improvement, and it’s not to say it’s stopped me reading promotional mail. What it’s actually don’t is stopped me receiving promotional mail at a bad time. If I’m out and about, I don’t really have time to open and read a promotion on my mobile device, let alone respond to it. Now I only read promotional mail when I’m in a position to act on it. While this may be anecdotal evidence, if enough people are like me, Gmail tabs may have done a great job in better qualifying the people who read your marketing campaigns.