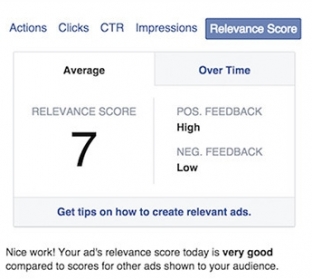 While it’s likely something that Facebook has always used as part of its advertising platform, Facebook this week unveiled something new to advertisers called “relevance score”. In what seems to be something very similar to “quality score” from Google PPC data, Facebook will soon be showing advertisers a predicted score rating of their adverts out of 10.

Crucial, here, is that Facebook say relevance score will affect the cost of the adverts. Now, this is likely what happens already (in fact, from experience I’m as good as certain that’s the case) but things are a fraction more transparent now, as Facebook are giving advertisers a black and white rating of their adverts.

Part of it that is interesting is the idea that Facebook will be giving people an early relevance score before the advert even goes live. This suggests it will be drawing on trends based around previous adverts and data is has. All well and good, but I speak from experience when I say Facebook’s predictive models (about required cost per click and other data when setting up an advert) can often be wildly inaccurate.

What’s also interesting though is that there will be a feedback loop. Facebook will take into account the frequency of clicks, as well as the frequency of report as spam and hides that an advert gets. Again, chances are they are already doing this, but it serves as a reminder or introduction to the idea that Facebook will be pushing your advert in part based on how well it is performing.

All in all, “relevance score” will probably change very little about we use adverts, but it will likely be something that soon becomes a “buzz word” for good advertising. Something people can cling to when an advert is running – will we start celebrating an “8”? Who can get the perfect “10”?