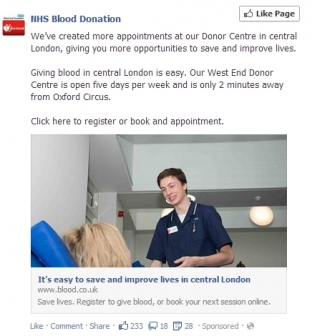 Before I wrote about how Google and Facebook are converging more and more. Facebook, with graph search, is trying to become a social search engine. And Google, with Google Plus, to become more social (try as I might, the phrase “ social network” just wouldn’t fit!). These movements are well documented and (in all honesty) it’s likely that neither is going to make much ground up on the other at their own game. People are too ingrained in their ways of using Google to search and Facebook to be social.

Here’s a different one, though, one that Facebook might have almost walked into by accident. Could Facebook become a serious, viable PPC alternative to Google? Unlike social networking and organic search, which is relied upon on the masses to be successful, PPC is not only a lot more definable, but run but a few people who are usually paid to be on the pulse of how they can get the best value out of their advert spend. In theory, at least, if Facebook could offer a viable alternative, the possibility is there that they could make the right people sit up and take notice.

So where is the option, then? Facebook recently did two things with their advert campaigns. Firstly, they opened up adverts so that they were easily available to be put into news feeds, rather than down the “right rail”. While the newsfeed ads cost a lot more, generally they’re of much better value because people don’t ignore them anywhere near as much as they do on the right hand side. Secondly, they now ask you a question when you setup a new advert – “what kind of results do you want”. In amongst a list of eight different things from event responses to app installations is “clicks to website”.

One key difference, before we even get started. Is that what Facebook counts as a “click”, when you setup cost per click, actually only applies if someone clicks “on your advert” – it doesn’t, necessarily, mean they will click through to your website; it could mean they click through to your page, or onto a photo in the post or into the comments. This could be viewed as skewing things a bit or actually invalidating it as a method of PPC altogether; I’ll stick with the former, for now.

But if we skip a couple of potholes and make a like for like comparison things actually get very interesting. Facebook, from my experience, will deliver you clicks through to your website at a far cheaper rate than PPC does. We’re talking pence, rather than pounds (<American> cents, rather than dollars </American>) for each click, which is a significant factor. Given the limited amount of data around, it would probably be too early to do a statistical analysis of this.

It’s not to say that you would necessarily have to pick one over the other, and it should also be pointed out that clicks aren’t always created equally. For example, Google Adwords advertising is very reactive, it plays off of the idea that people are actively looking for something. If someone puts in a search for a specific brand of Nike trainer, chances are they are looking to buy it. If someone says they like Nike trainers on Facebook – chances are they already own them (or want them, either way there’s not the same element of immediacy).

It’s far too soon to tell what role, if any, Facebook could play in the PPC market. But it’s certainly an option in paid traffic through to your website. By being pro-active with your advertising, you can guarantee exposure that is more difficult with PPC. Also, there are some things people just don’t search for, or don’t know to search for. Facebook PPC removes that element. It’s not to say pick one or the other, but it’s certainly something to have a look at.